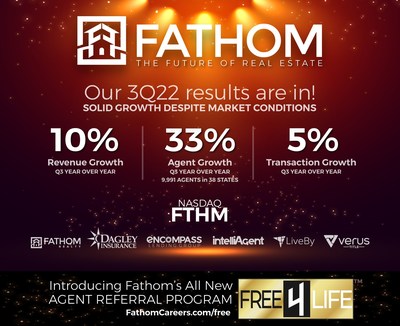 Third Quarter 2022 Financial Results
Total revenue grew 10.2% for the third quarter of 2022 to $111.3 million, up from $100.9 million for last year's third quarter. Against the backdrop of a challenging macro environment, Fathom completed 12,077 real estate transactions for the 2022 third quarter, an increase of approximately 5% from the same quarter last year. Fathom's real estate agent network grew approximately 33% to 9,991 agents on September 30, 2022, up from 7,536 one year ago.

"Fathom's revenue grew by more than 10 percent and our agent network grew 33 percent to nearly 10,000 agents, even amidst the backdrop of a challenging residential real estate market," said Fathom CEO Joshua Harley. "Our commission structure puts more money in agents' pockets by charging a small fraction of what traditional brokerages charge, making it a highly attractive value proposition. In fact, our enhanced agent referral program, which we began beta testing on September 1 of this year, resulted in the best referral month in our Company's history. At the same time, the leverage we've built into our model should allow us to enhance margins as we right size expenses and drive more agents and transactions through our network.

"Our priority right now, even in today's market environment, remains achieving total company Adjusted EBITDA profitability in the first half of 2023, and generating positive cash flow in the third quarter of 2023," Harley said. "We plan to accomplish this goal, in part, by accelerating our agent and transaction growth through our new referral program, and by further increasing our revenue for 2023 through higher agent transaction fees and caps. We have already begun collaborating with the heads of each of our business units to cut costs by $1.5 million per quarter in a way that will not hinder or slow our growth," continued Harley.

"While Fathom is not immune to current industry challenges, we continue to believe that we built a better mousetrap…one with more resilience and staying power, and with the ability to grow in down markets."

GAAP net loss for the 2022 third quarter was $6.0 million, or a loss of $0.38 per share, compared with a GAAP net loss of $3.4 million, or a loss of $0.24 per share, for the 2021 third quarter. Weighted average shares outstanding increased approximately 10.4% for the 2022 third quarter, compared with the same quarter last year. The year-over-year change in GAAP net loss resulted principally from an approximate $1.4 million increase in non-cash stock compensation expense and a $0.5 million increase in non-cash amortization of intangible assets and depreciation, increases in investments in technology, as well as higher marketing and general and administrative expense (G&A) related to building the Company's ancillary businesses.

G&A totaled $11.5 million, or 10.4% of total revenue, for the third quarter of 2022, compared with $9.6 million, or 9.5% of total revenue, for last year's third quarter. On a sequential basis, G&A decreased from $12.4 million for the second quarter of 2022. The Company updated its goal of reducing expenses by $750,000 per quarter to trimming at least $1.5 million in costs per quarter by the first quarter of 2023, as it continues right sizing its expense structure in line with current market conditions.

Cash and cash equivalents at September 30, 2022 were $14.5 million, compared with $37.8 million at December 31, 2021. The reduction in cash was attributed to investments in Fathom's ancillary businesses, operations, technology and acquisitions, as well as stock retired under the Company's share repurchase program.

Fathom did not purchase any stock during the third quarter of 2022. As of September 30, 2022, there was approximately $4.0 million remaining under the share repurchase authorization.

"The Fathom team is working hard to generate additional revenue and cut costs, without impacting our ability to grow, by providing the best possible service to our agents, home buyers and sellers," said Fathom President and CFO Marco Fregenal. "We are also steadfastly focused on reaching profitability as soon as possible, and posting sustainable solid financial performance for all of our stakeholders. As with most real estate cycles, we believe this one will reverse course over time, and with our unique business model, we are confident that Fathom is strategically positioned to excel."

"We believe this new agent referral program is the most attractive incentive in the industry, as it is based solely on an individual agent's efforts. The initial feedback from our Fathom agents has been validating, and their excitement is clear based on the exceptional agent referral numbers we experienced in September when we launched the Cap4Life portion of the program in beta," explained Harley.

Guidance/Long-Term Targets
Fathom's guidance for the 2022 fourth quarter and full year, assumes that the residential real estate market will continue to soften and that interest rates will remain at current levels or increase. The Company believes that if market conditions improve, it could generate results that are better than currently anticipated.

The Company reiterated that it believes it can generate Adjusted EBITDA exceeding $40.0 million per year at 100,000 to 110,000 annual transactions.

Cautionary Note Concerning Forward-Looking Statements
This press release contains "forward-looking statements," including, but not limited to, its ability to achieve breakeven Adjusted EBITDA in the first half of 2023 and cash flow breakeven by the third quarter of 2023, its ability to continue attracting agents and generating higher revenue, and its ability to reduce costs by $1.5 million per quarter by the first quarter of 2023, among others. Forward-looking statements are subject to numerous conditions, many of which are beyond the control of the Company, including: risks associated with general economic conditions, including rising interest rates; risks associated with the Company's ability to continue achieving significant growth; its ability to continue its growth trajectory while achieving strong profits over time; its ability to generate positive operational cash flow; its ability to demonstrate sustainable profitability; and others set forth in the Risk Factors section of the Company's most recent Form 10-K as filed with the SEC and supplemented from time to time in other Company filings made with the SEC. Copies of Fathom's Form 10-K and other SEC filings are available on the SEC's website, www.sec.gov. The Company undertakes no obligation to update these statements for revisions or changes after the date of this release, except as required by law.

NON-GAAP FINANCIAL MEASURES
To supplement Fathom's consolidated financial statements, which are prepared and presented in accordance with GAAP, the Company uses Adjusted EBITDA, a non-GAAP financial measure, to understand and evaluate our core operating performance. This non-GAAP financial measure, which may be different than similarly titled measures used by other companies, is presented to enhance investors' overall understanding of our financial performance and should not be considered a substitute for, or superior to, the financial information prepared and presented in accordance with GAAP.